A victim in my own house

The story of my life was published in November of last year, it would have been nice if they got it right.

A victim of her own environment: Linda Sepp fought being evicted because of her allergies. But now she’s being poisoned at home. 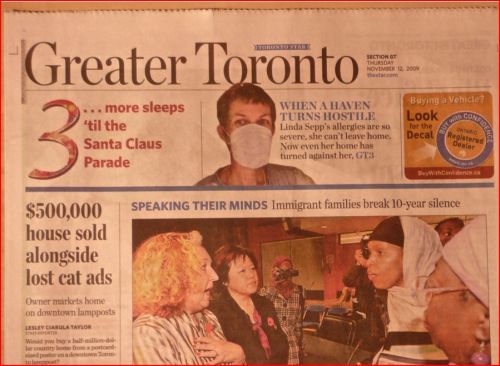 To read the article below, click on photo to enlarge.

And here is my Letter to the Editor in response:

I’m really disappointed by these articles.

The reporter had all the information, including letters from doctors about my situation and medical need for “safe” housing, which does not exist and should be provided by the health care system for people who are severely chemically injured as a primary part of our required health care.

And how the landlord has placed impossible to overcome obstacles into his seemingly generous offer, and that I owe the rent money because the landlord moved my mother out from the downstairs unit with an offer she couldn’t refuse, while knowing that I could not afford it here alone.

And how the province is refusing to provide the type of assistance one would expect from a social safety net, that I almost froze to death here as a result, that I have no safe warm clothing to wear because I cannot afford chemical free safe clothing, which is another prescription from my doctors, or wash it here without whole house water filtration.

Also, that Martin Pall’s paper about Multiple Chemical Sensitivities / Environmental Sensitivities being caused by toxic chemicals, and the info about it in the Toxicology text with all kinds of peer reviewed documentation debunking the industry line about MCS/ES being a psychological condition.

The articles also completely minimized my symptoms, which are completely disabling, and neglected to mention the Human Rights Commission’s recognition of the disability.

Other relevant links are below:

A victim of her own environment.

The Housing Challenge in MCS.

NOTE: fragrance chemicals and other VOC’s migrate in exactly the same ways.

1. MCS is a stunningly common disease, even more common than diabetes. This has been shown in a series of nine epidemiological studies from the United States and one study each from Canada, Germany, Sweden and Denmark. In the U.S., approximately 3.5% of the population is affected by severe MCS, with much larger numbers, at least 12% of the population, being moderately affected. MCS is, therefore, a very large international disease epidemic with major implications in terms of public health.

2. MCS is caused by toxic chemical exposure. Cases of MCS are initiated by exposure to seven classes of chemicals. These include three classes of pesticides and the very large class of organic solvents and related compounds. In addition, published studies implicate mercury, hydrogen sulfide and carbon monoxide as initiators. All seven of these classes of chemicals have been shown in animal studies to produce a common response in the body, excessive activity of a receptor in the body known as the NMDA receptor. Furthermore animal studies have demonstrated that chemicals belonging to each of these seven classes can have their toxic responses greatly lowered by using drugs that lower this NMDA response. Because excessive NMDA activity is implicated in MCS from other studies, we now have a compelling common response that explains how such diverse chemicals can produce the disease that we call MCS.

3. The role of chemicals acting as toxicants in MCS has been confirmed by genetic studies. Four such studies have shown that genes that determine the rate of metabolism of chemicals otherwise implicated in MCS, influence susceptibility to becoming ill with MCS. These four studies have been published by three research groups in three countries, the U.S., Canada and Germany, have collectively implicated six genes in determining susceptibility to MCS. Each of these six genes has a role in determining the rate of metabolism of MCS-related chemicals. The German studies by Schnakenberg and colleagues are particularly convincing on this because of the extremely high level of statistical significance of their studies implicating four of these six genes. There is only one interpretation for the role of these six genes in determining susceptiblity to MCS. It is that chemicals act as toxicants in initiating cases of MCS and that metabolizing these chemicals into forms that are either less or more active in such initiation, influences therefore, the probability that a person will become ill with MCS. It is clear, therefore, that MCS is a toxicological phenomenon, with cases being caused by the toxic response to chemical exposure.

4. We have, a detailed and generally well supported mechanism for MCS. This mechanism explains both the high level chemical sensitivity that is the most characteristic symptom of MCS, as well as many other symptoms and signs of this disease, can be generated. This mechanism is centered on a biochemical vicious cycle, known as the NO/ONOO- cycle, which interacts with other mechanisms previously implicated in MCS, notably neural sensitization and neurogenic inflammation. These act locally, in various tissues of the body, to generate local sensitivity in regions of the brain and in peripheral tissues including lungs, upper respiratory tract and regions of the skin and the GI tract. Because of this local nature, different MCS patients differ from one another in their sensitivity symptoms, because the tissues impacted differ from one patient to another. In addition to the evidence discussed above, this general mechanism is supported by various physiological changes found in MCS and in related illnesses, by studies of MCS animal models, by objectively measurable responses of MCS patients to low level chemical exposure and by therapeutic responses reported for MCS and related illnesses.

5. For over 20 years, some have falsely argued that MCS is a psychogenic disease, being generated in their view by some ill defined psychological mechanism. However this view is completely incompatible with all of the evidence discussed earlier in this release. While such incompatibility is more than sufficient reason to reject these psychogenic claims, the MCS toxicology paper lists eight additional serious flaws in the psychogenic arguments. There is a long history of false psychogenic claims in medicine, where such diseases as asthma, autism, Parkinson’s disease, ulcers, multiple sclerosis, lupus, interstitial cystitis, migraine and ulcerative colitis have been claimed to be generated by a psychological mechanism. The 2005 Nobel prize in physiology and medicine was give to Drs. Robin Warren and Barry Marshall for showing that ulcers are caused by a bacterial infection, and are not of psychogenic origin. It is clear, now, that MCS is physiological disease initiated by toxic chemical exposure that has been falsely claimed to be psychogenic.

3 responses to “A victim in my own house”