MCS/ES: Societal Neglect = No More Fun and Games for Life on the Planet

Please take a moment to feel your heart beating.
Not everyone can do this anymore.

While some progress has been made, it’s still too little,
too late for far too many people.

This will not change until more people who have MCS/ES come forward with their stories, and more  healthy people start advocating and helping us in daily life, as well as pushing governments and medical institutions to pull their heads out of the sand (and industry pockets) and get into (at least) the 20th century as far as the very serious environmental and related health issues are concerned.

“Business as usual is a disaster”
Robert Watson 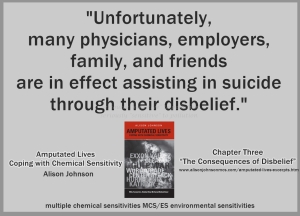 “Unfortunately, many physicians, employers, family, and friends
are in effect assisting in suicide through their disbelief.”
(and neglect)

“The Consequences of Disbelief”

“Twelve years as an advocate for the chemically sensitive has led me to the sad realization that a large number of chemically sensitive people have taken their own lives and many others are inching ever closer to that decision because they find it such a daunting task to locate a safe place to live or work and are rapidly running out of money. And at the same time that they are engaged in this herculean struggle, far too many of them are facing a discouraging skepticism from those about them.”

Links to several chapters of the book, where stories about people’s lives are featured are available here:

It is now 2019, and while some excellent progress has been made, we are still up against the same denial of reality for human canaries as far as recognition,  inclusion, and accessibility are concerned in housing, health care, public places, and everything else society has to offer for those who do not have MCS/ES.

Not that we can accept those things in the toxic ways they are currently offered, they are simply not safe for us to accept, anymore than a house or business or appliance made from peanuts would be safe for someone who is allergic to peanuts. We’ve been asking for non-toxic, harmless access to air, water, food, things, and places because that is accessible health care for us.

The Honourable David C. Onley, the 28th Lieutenant Governor of Ontario (2007-2014) was appointed to lead the Third Review of the Accessibility for Ontarians with Disabilities Act (AODA).

He found that “For most disabled persons, Ontario is not a place of opportunity but one of countless, dispiriting, soul-crushing barriers.”

Several mentions of ES were made, and a specific recommendation:

In the SUMMARY OF RECOMMENDATIONS (on pg 80):

7. Ensure that accessibility standards respond to the needs of people with environmental sensitivities.

The final report from the Ontario government’s Task Force on Environmental Health, CARE NOW: An Action Plan to Improve Care for People with Myalgic Encephalomyelitis/Chronic Fatigue Syndrome (ME/CFS), Fibromyalgia (FM) and Environmental Sensitivities/Multiple Chemical Sensitivity (ES/MCS) (December 2018), has still not been released to the public, nor have the interim report’s (2017) recommendations been adopted.

Corporations are making fun of people with fragrance and chemical “sensitivities”, and other adverse health effects from their products, and misleading people about the serious nature of the consequences (the beginning of this post mentions some devastating human effects, there are many others).

Meanwhile, the things that harm people with chemical and environmental sensitivities, are also destroying the same environment we all depend on for life.

Isn’t it beyond time that society listened to the human canaries and took action to stop the harm, to stop the use, sale, and manufacture of harmful products and materials, and to ensure that environments are non-toxic, environmentally friendly, and safely accessible for the people who can help warn the others?

Think about the people who are isolated, and can’t open windows or be outside, anywhere, because of all the toxic products and materials that release fumes everywhere. Realize that the majority of the older people who developed MCS/ES weren’t born with it, but developed this later in life from exposures.

Millions of people all around the world now have what are disabling and preventable chronic health conditions, many of which improve considerably when the sources of involuntary exposures to environmental pollutants and accessibility barriers are removed.

Who knows how many children are affected? No-one is trying to find out. Child suicides and attempts have rocketed in recent years. Why is that? Who gains and who loses when the causes of health problems aren’t properly addressed?

Let’s stop destroying the world as we and others have known it.

“Business as usual is a disaster”
Robert Watson

It’s time to speak up an out and hold the corporations, their marketing departments, governments, and medical institutions to account. By doing so we can reduce the plentiful health harms, deaths, and pollutants that are affecting everyone all around the world. If we start now, there’s still a chance of a livable existence for future generations… but only if we all act now.

You can start by paying attention to the human canaries in your lives. We can help you shift your daily activities to those that help instead of cause harm.

5 responses to “MCS/ES: Societal Neglect = No More Fun and Games for Life on the Planet”