Imagine my surprise when two weeks ago I received a phone call saying a unit had become available at Barrhaven, one of the specially built units that have the potential to meet most of my housing needs!

This photo was taken the day before my birthday last July, after being at the cabin about three weeks.

It’s already June, over a year since I was forced from my previous home without another place to go to due to my disabling medical condition of severe Multiple Chemical Sensitivities, Environmental Sensitivities, Fibromyalgia, and Electro HyperSensitivity, none of which is properly recognized in this country. It’s almost a year since I (barely) made it to the summer cabin owned by some in my family. And half a year since my father passed away.

Despite a lot of struggle, I made it though winter with the help of a local woman and her family, some assistance from several canaries, a few friends in Toronto, and my uncle’s wife in Massachusetts (who had been paying the electric bill for the cabin for years and continued with my winter heating costs), as well as the hopes and prayers of many. I’m eternally grateful. 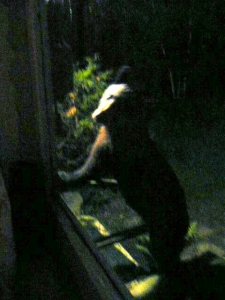 Yearling bear climbing on the hand railing beside the door at the cabin.

I also was blessed by the visits of a young screech owl, wild turkeys, numerous other birds, squirrels, chipmunks, and for a short time some young raccoon siblings. I’ve learned a lot from these creatures and will treasure the photos I was able to take, as otherwise the memories would likely be lost in brain fog. The other night I was visited by a bear, a yearling, who was looking for food, alone. I got a blurry photo of him as he was about to climb on the hand railing beside the door to eat the moths circling around the light.

My challenges at the cabin have been great. No running water, no indoor toilet, no fresh organic food close enough to get for myself and too far for others to drive regularly, no insulation, no proper storage for the things I couldn’t have near me but needed to live, inadequate winter clothing, getting snowed in, and more challenges that should not be endured by anyone in a rich country like Canada, especially those with disabilities.

Through the course of it all, I discovered my situation does not fit into any official safety net mandate. There are only seven medically required housing units built for people with environmental sensitivities in Canada. I’ve been on a wait list since 2006, maybe 2007. Meanwhile, I’ve gone from a moldy home to an apartment balcony, and spent winter in a summer cabin. But despite the healing effects of the external environment at the cabin, I’ve lived here with the threat of being forcefully removed by a certain member of the family. The need to find a safer place has been a constant worry.

So imagine my surprise when two weeks ago I received a phone call saying a unit had become available in Barrhaven, one of the specially built units that had the potential to meet most of my housing needs! They wanted to know if would I please go there within a week and spend a night or two to see if it was actually suitable for me (people with MCS/ES are affected by different things, and some people are not able to tolerate the materials in these units, or the noise of the air handling system).

I actually cried for two days, mostly since the location is in the middle of a suburb that has grown around it since it was built and I thought for sure I would lose my ability to go outside for fresh air because of the toxic laundry product fumes from neighbourhood dryer vents, a problem I’ve had previously. Being able to be outside here at the cabin– to witness the seasons, the wildlife, and most especially to breathe the fresh air– has been so important to my recovery. The idea of being locked inside again was devastating! I had my heart set on finding a place near the middle of nowhere, where I could plant an organic garden and to try to be as self sufficient as possible, since finding people with the time and inclination to help is sometimes impossible. So this came as a shock to me!

Yet despite the initial disappointment , I was ready to jump at the opportunity to have a safe enough home to live in, one with safe running water, indoor toilet, places to put things I couldn’t be in the same room with safely, a home where I wouldn’t be threatened with having to leave without much more than a moment’s notice, a home where the structure wasn’t falling apart, a home where I could heal the trauma of living under siege for so many years. But first I had to find help to make the trip to check out the unit.

I am blessed that my friend (guardian angel and lifesaver) here was able to re-arrange her plans in order to drive me there and back, and able to find places in the Ottawa area to spend those two nights, as staying with me there was not an option. There aren’t many people in the world who would do something like this for someone they barely know! She is truly an extraordinary and special woman.

Preparing and packing for the three-day trip was difficult: food and water, my cot, my cooking utensils, toilet paper and other essentials needed to be taken. Then the day came, and three hours into the trip I was so sick I thought I wasn’t going to make it. I had to ask to stop, got out and was barely able to walk around, trying to get some air. As we continued, the highway got bigger and busier, and cell towers started appearing at the sides of the road, sending piercing pains through my head. Things were not looking good.

We eventually arrived there, about four hours after leaving the cabin. It was very strange to be in a place with so many other people again. “My” unit was at the very end, with trees and a grassy area between the building and the train tracks, and there was a small shared garden and patio stone area in front with a tall evergreen hedge between this area and the baseball field on the other side. It was not as bad as I feared it could be.

Testing out my new home!

Inside reminded me of an Ikea loft. Polished concrete, bricks, and wood paneling. I was perplexed by the lack of kitchen cabinets. Apparently mold was a worry so none were installed. I’ve lived with open shelving before, and things get dusty and greasy, so this was a concern. The air wasn’t too bad though, although it seemed the Heat Recovery Ventilation was pushing some fragrance through it. That was disappointing as the air could have been better filtered.

I was able to determine that there wasn’t anything life-threatening there, so it would be ok to remain overnight alone after removing the CFL bulbs that I could and replacing them with regular bulbs my friend went out to buy for me (which I had to scrub down to remove the fabric softener contamination from!). We made plans with my friend that she’d drop by the next afternoon to see how I was doing. I unpacked a few things and made a cuppa coffee! (Fair-trade and organic of course.)

The coffee revived me a bit, and I felt strong enough to go outside and look around. I wanted to see who my neighbours would be, and was able to meet the ones on my side of the building. I went back inside my possible new home, knowing a little more about the area, and settled in. When I felt a bit better, I started exploring. I was surprised and pleased that I was able to do this, after a long trip and all the exposures! I found several storage areas that did not quite agree with me, so I kept those doors shut. But the main living room and kitchen area were fine for me! The air system though was very noisy. So noisy that I hardly heard a train go by 50 feet away, and I hardly heard the airplanes flying directly overhead. Paradise not. But the air in the living area was good. I was not getting any sicker or feeling any worse. And this was a great sign!

I dragged my cot and bedding upstairs and set it up in the small bedroom with my little portable air purifier. There was something not quite right in the larger bedroom but not life threatening; I thought of ways to work with what was there, with what I needed, and what I was capable of doing to make it work. This was promising!

When I woke up the next morning and wasn’t completely dragging ass, I knew I’d be ok there, that I’d found my next home! As long as water filtration is installed, I believe I can make it work. And if I can find safe containers to grow food in, and certified organic soil around Ottawa, then I could even grow some herbs and greens there!

That first morning in my next home, I sat to meditate, and prayed for help to heal and release much of the trauma I’ve been carrying around. I’d brought my laptop and the DVD of my father’s memorial service, and as I sat on the little stool I’d brought, I realized it was exactly six months since he’d passed away. Bittersweet. If I could change anything, it would be that he’d have had the peace to see me settled in a safe home. I move there at the end of the month. I think some of those earlier tears were tears of relief.

I’m back at the cabin now and focusing on what I need to do in preparation for my move to Barrhaven:
• Find a safe and reputable long distance moving company to move my things from storage in Toronto to my new home near Ottawa, and hope the Ontario Disability Support Program will cover the actual cost.
• Find help to get myself and my things from the cabin to Barrhaven.
• Find a new all-metal top loading washer and dryer, and funding source to acquire them.
• Find a safe shower curtain (oh to be able to have a safe shower or bath when I need one!).
• Find help to put my old car in for a check-up and renew my license plate before I go.

51 responses to “I’m moving to a new “environmentally sensitive” housing unit in Ottawa!”