And just like many of us who have MCS/ES have been saying for years:

Supermarket food is contaminated with fragrance and plastic chemicals. 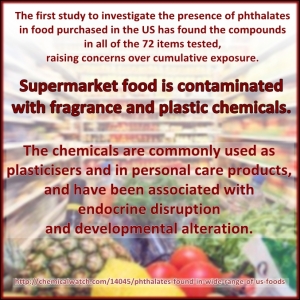 That study, “Phthalate Concentrations and Dietary Exposure from Food Purchased in New York State” led by Arnold Schecter from University of Texas School of Public Health, looked for 9 different phthalates in 72 individual food samples purchased in Albany, New York, and found some in every food tested!

“While estimated intakes for individual phthalates in this study were more than an order of magnitude lower than EPA Reference Doses (RfDs), cumulative exposure to phthalates is of concern.”

Since we can’t really depend on the EPA to set health protective guidelines with all the industry meddling they get,  we know the levels need to be way lower than anything suggested. Not only that, but for those of us with MCS/ES, who need to avoid exposure to phthalates and other fragrance chemicals (just like people with celiac disease have to avoid gluten) this presents a huge access problem in regards to finding safe food to eat.

I haven’t been able to eat anything from a supermarket for over 7 years. I can taste the fabric softener, dryer sheet and fragrance chemicals in anything that isn’t in glass, foil or a tin. And even the organic foods I used to get that were in glass (organic jams and applesauce) no longer sat well with me, most likely due to plastic phthalates and other chemical contamination during processing.

Back in about 2006 or 2007 I wrote around asking if anyone had ever tested the organic produce from a supermarket to see if it could still qualify as organic after being exposed to the airborne chemicals. No-one was interested.

In another new study, “Unexpected results in a randomized dietary trial to reduce phthalate and bisphenol A exposures” also just released, and reviewed here, they tested for phthalates and BPA, using specially designed diets that included organic foods and  were supposed to reduce the intake of these chemicals. They were shocked to find increased levels.

“The authors conclude in their study: “It may be that our findings reflect an isolated rare contamination event because of unusual processing or a packaging abnormality. It also could be the case that the food supply is systematically contaminated with high phthalate concentrations, which are difficult to identify.”

We need to get fragranced products away from food, simply because chemicals and food should not be stored in the same air space (hello grocery stores, I’m pointing a finger at you here, as well as any food prep facility that has a so called air “freshener” anywhere on the premises)  and stop using plastics that leach out chemicals and don’t protect foods from absorbing other chemicals floating around in the air.

I’ve ended up having to buy all my produce from organic farmers markets or an organic delivery service that doesn’t use fragranced products in their warehouse. I still sometimes get fragrance contaminated food, most likely from people who have recently applied lotion or sanitizer to their hands just before handling the foods. I am unable to buy prepared foods even from organic farmers, because when I did, I could taste their conventional dish detergent in the food! Not everyone who grows organic food knows the other chemical risks we all face. I recently saw photos of fair trade organic cacao beans being dried out in the sun on plastic tarps. Eggs are another challenge, since once they are washed, they absorb all fragrances. So some of us have to do without, a lot…

Glass, foil and food grade cellophane are best at protecting foods and things, but the foods and things need to be grown, manufactured, processed  and handled in ways that prevent contamination before delivery to us, the end users.

We need better regulations and more people who care!

“UNLESS someone like you cares a whole awful lot,
nothing is going to get better. It’s just not.”

21 responses to “Phthalates in Supermarket Foods”