Statement From ARCH and CELA re MCS, ES, and the Ontario Task Force on Environmental Health

The ARCH Disability Law Centre and the Canadian Environmental Law Association (CELA) announced in September of 2016 that they were working on a report about the challenges faced by people with multiple chemical and/or environmental sensitivities.

“ARCH, in collaboration with the Canadian Environmental Law Association (CELA), has been working on a report about the challenges faced by people with multiple chemical and/or environmental sensitivities.  Our report was informed by consultations with persons who experience these disabilities.

One of our major findings is the significant extent of attitudinal barriers faced by this group of people.  Often, they find that they are not believed when they ask that scents, fragrances or other products not be worn in the workplace, educational settings, health care settings or places where services are received.  We believe that a large awareness campaign is needed to educate the public about the impact of these disabilities on all aspects of a person’s life.”

The release of their report has been delayed because they want to respond to the Ontario Task Force on Environmental Health’s Interim Report, which came out just when their own report was intended for release.

In the November 2017 issue of Arch Alert, both ARCH and CELA  urge the Task Force to do more consultations with those of us who are living the experience: 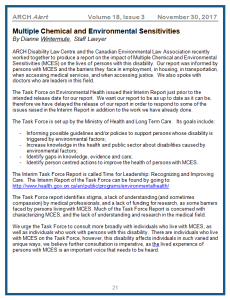 ARCH Alert November 2017
(click on the image to enlarge)

All true, and all good, and also necessary, as people with severe MCS/ES are always left out of discussions due to the accessibility barriers and poor health, and even for people with medium ‘sensitivities’, there are near zero efforts made in society to be accessible and inclusive, with few written fragrance or scent free policies being enforced anywhere, leaving people at risk of serious harm.

What ARCH and CELA seem to have missed, is  that the reason the Task Force was even created was due to the OCEEH  proposal that included a report which was based on interviews with the community, titled “Recognition, Inclusion and Equity: The Time is Now – Perspectives of People Living in Ontario with ES/MCS, ME/CFS and FM” (2013). Admittedly the report could have been better edited for easier reading, but nonetheless, it’s there, as are several other comprehensive reports.

Despite the real need to include the voices of more people with MCS/ES, across the spectrum of severities and wealth (poverty really can change the realities experienced) I really hope that ARCH and CELA don’t delay their report much longer, as we need all the pressure we can get on this government and other sectors of society as soon as possible, for them to act now, before more lives are lost. Many have been waiting since 1985 for action!

Varda Burstyn, one of the original members of the Task Force, as well as a founding member of the OCEEH proposal, has written an  analysis of the interim report and the recommendations released by the Task Force, which includes an important historical perspective:

DÉJÀ VU ALL OVER AGAIN (pdf)

She also assembled the recommendations from the 3 historical reports into one document, available here:

More info and the other documents mentioned above are available on Varda Burstyn’s new web page on the Ontario situation:

You may have noticed and perhaps even been confused by the different acronyms – MCS/ES, ES/MCS, and now MCES.

I started using MCS/ES back in 2007 when the Canadian Human Rights Commission released their reports and policy using the umbrella term of environmental sensitivities (ES).

As the community I’ve been a part of mostly self identifies as having MCS, and as most research done had used the term MCS, (some unscrupulous industry types also use MCS in disrespectful and erroneous ways), I felt it was important to use the two terms together to show there are legally enforceable rights as well as make it possible for people to find more info on the community and the research that used the MCS term.

ES, as an umbrella term, also includes EHS (people who are disabled by electromagnetic and/or wireless technology), and other disabling sensitivities too  (see the 2007 Medical Perspectives document from the CHRC for more).

The Ontario Human Rights Commission lists environmental sensitivities and chronic fatigue syndrome under Non-Evident Disabilities in Section 2.2. of their document Policy on ableism and discrimination based on disability, where they also mention multiple chemical sensitivities, chronic pain, asthma due to mould allergies, autism, and others specifically in different places in the document.

ES/MCS started to be used by some other groups, including the Environmental Health Clinic in Toronto after I had coined MCS/ES. Same thing, different order.
As MCS/ES rolls off my tongue much easier, I’ve stuck with using it.

Now, ARCH and CELA are using MCES, but I guess we’ll have to wait to see their report to learn why.

Anyway, long story short, things are happening, but we need more people to pressure the politicians to act now, by minimally adopting the Task Force recommendations a.s.a.p. (remind them that there’s an election coming up – there are many hundreds of thousands of us who could vote based on what they do or don’t do).

I know reports can be tedious reading for people with brain fog or short attention spans, but it’s also important to understand what is going on, and how important it is to act sooner rather than later, because future generations are also at stake here. The things that are harming and disabling us are also harming and causing chronic health problems in children.

This news, also from November 2017, should make everyone stop and think!

“some troubling mental health trends including:

– 45 per cent of clients who use a local mental health walk-in clinic are under the age of six.

– One in four children in Ottawa are developmentally delayed before they start school.”
…

Campaign tackles effects of stress on kids as young as 6

NOTE: 24/7 exposure to toxic chemicals (like the neurotoxins, carcinogens, and endocrine disrupting chemicals in fragrances and many other indoor products and materials) plus 24/7 wireless radiation, plus GMO pesticide laden foods and food-like products might just be destroying human capacity for life… (but I’ll bet the pharmaceutical industry is really happy, as their profits are still going up)

We need to turn this around and act now!

Recognition and accommodations for people with MCS/ES will benefit all of society!

10 responses to “Statement From ARCH and CELA re MCS, ES, and the Ontario Task Force on Environmental Health”