Global colony collapse is really happening. Sitting back and ignoring it, wishing it would just resolve on its own, or thinking someone else is going to fix things is no longer an option.

We ALL have to take this seriously and show some love now if future generations are going to have any hope of anything resembling a decent quality of life.

“We must work hard to solve these global problems, starting today.”

As members of the scientific community actively involved in assessing the biological and societal impacts on global change,

we are sounding this alarm to the world.

For humanity’s continued health and prosperity, we all –individuals, businesses, political leaders, religious leaders, scientists, and people in every walk of life –must work hard to solve these five global problems starting today:

Extinctions – not since the dinosaurs were exterminated have so many species and populations died out so fast, both on land and in the oceans.

Wholesale loss of diverse ecosystems – we have plowed under, paved over, or otherwise transformed more than 40 percent of Earth’s ice-free land, and no place on land or in the sea is free of direct or indirect human influences.

Toxic pollution – environmental contaminants in the air, water and land are at record levels and increasing, seriously harming people and wildlife in unforeseen ways. Of special concern are the novel chemical humanity spreads from pole-to-pole that mimic hormones and may derange animal development

Human population growth and consumption patterns – seven billion people alive today will likely grow to 9.5 billion by 2050 unless disaster intervenes, and the pressures of heavy material consumption among the middle class and wealthy may well intensify. 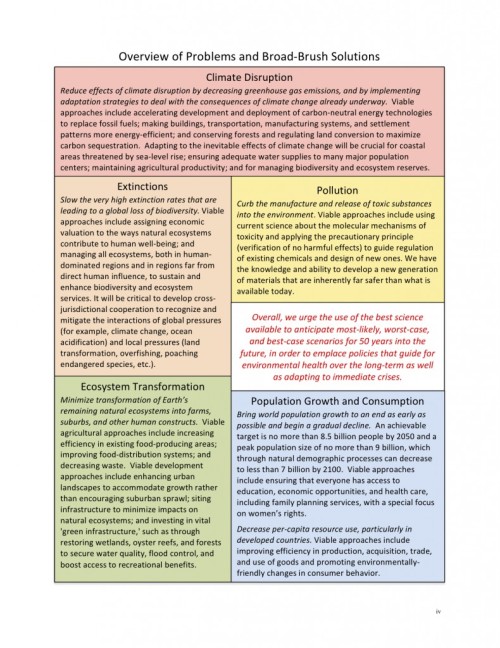 For a better view of these images, to see who has signed the document, and to download a PDF of either the Executive Summary or the full report, please visit: