Scientists to WHO: Recognize MCS and EHS

International Scientists Invite WHO to Recognize MCS and EHS

“Following the fifth Paris Appeal congress, which took place on the 18th of May, 2015, the attending European, American and Canadian scientists unanimously decided to create a working group and to write a Common International Declaration to request an official recognition of these new diseases and of their sanitary consequences worldwide.

The declaration calls upon national and international bodies and institutions and particularly the WHO, for taking urgently their responsibility for recognizing electrohypersensitivity and multiple chemical sensitivity as real diseases, including them in the International Classification of Diseases.

This International Declaration also asks national and international institutions to adopt simple precautionary measures of prevention, to inform populations and requires the appointment of real independent expert groups to evaluate these sanitary risks in total scientific objectivity, which is not the case today.” 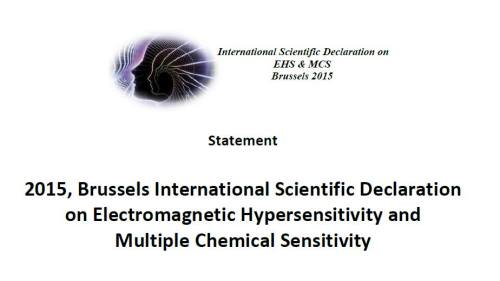 The links to download the Declaration Statement and Press Release are below, as well as the link to see the presentations that took place during the meetings in May of 2015.

Royal Academy Of Medecine Belgium
The Fifth Congress of the Paris Appeal
http://appel-de-paris.com/?lang=en

On May 7, 2004, at UNESCO, international renowned scientists, medical doctors, environmental organization representatives gathered with the same determination during the “CANCER, ENVIRONMENT AND SOCIETY” Congress organized by the ARTAC. This meeting between scientists and non-governmental organizations resulted in the Paris Appeal, historical declaration regarding the dangers of chemical pollution for the health.

The development of numerous current diseases is a result of the deterioration of the environment.

Chemical pollution represents a serious threat to children and to Man’s survival.

As our own health, that of our children and future generations is under threat, the Human race itself is in serious danger.
…

The Paris Appeal is a reference document for European authorities. Today, several hundreds of international scientists, close to 100 NGOs and approximately 200,000 citizens have signed the Appeal. It has also been signed by the French Medical Board, as well as by all national medical Boards and unions across the 25 Member States of the European Union, gathered in the Standing Committee of European Doctors, which represents two million European doctors.

In view of our present scientific knowledge, we thereby stress all national and international bodies and institutions, more particularly the World Health Organization (WHO), to recognize EHS and MCS as true medical conditions which acting as sentinel diseases may create a major public health concern in years to come worldwide i.e. in all the countries implementing unrestricted use of electromagnetic field-based wireless technologies and marketed chemical substances.

Inaction is a cost to society and is not an option any more.

Waiting longer to do anything precautionary will prove devastating to the human race, even if temporarily profitable for the chemical, telecom, and pharmaceutical industries.

The Appel de Paris site was reported to be down.

You can download a copy of the PDF document that I saved here > 2015 Statement-Brussels-EN. I didn’t save the Press Release. Hopefully they will be able to get the site back up soon.

5 responses to “Scientists to WHO: Recognize MCS and EHS”