Since papers, inks, and computers can release fumes that are too toxic for some of us to breathe, adversely affecting our ability to remain functional, and since there’s no getting away from papers and technology in modern society, an assistive device was invented some decades ago that could be useful to bring back as a more popular accessory: the reading box!

I recently ran across an ad on Craigslist for one that was for sale in the US, and then someone found an old catalogue (2002 PDF) with a few other pics, so I thought I’d share the info and images here in case they can help anyone else.

A reading box is basically a box made of wood, glass, or metal, with an opening in the front, and glass on top to read through. A vented box will also have a dryer hose out the back, and a fan of some sort to push the air through the hose and out of a window. A barrier with a vent sized exhaust hole would also be needed to cover the window opening being used.

This computer box is from the catalogue.

The Safe Reading & Computer Box Company was making their boxes out of 20-gauge, galvanized steel (as stated in the above mentioned catalogue).

When metals are used, it’s important to wash off all the manufacturing oil residues with TSP,  followed by a safe, unscented detergent, soap, or whatever else is tolerated.

As some people who have MCS also have EHS, and wi-fi is not an option,  there needs to be a hole for the cables and wires as well. I am not aware of how the EMFs etc would be affected in a metal box, maybe a more scientifically aware person could  comment on that?

Some of us need to use an external wired mouse and keyboard with laptop type computers, so the space might need to accommodate that.

If wood is easier for you, but still poses an off-gassing problem (either from the wood itself, or from a finish that was applied to it), you could cover it with BBQ foil or Dennyfoil, (a builder’s product), using foil tape, or possibly, someone else could glue it on with a safer glue and keep it airing out until it has dried.

It may be worth exploring different types of glass for the top, as something glare free is  easier to read through, but it’s also possible that some finishes may be problematic and require also off-gassing for an unknown amount of time. If anyone has any knowledge and experience with glass, please comment and share your wisdom.

The following pics were in the Craigslist ad that is no longer up: 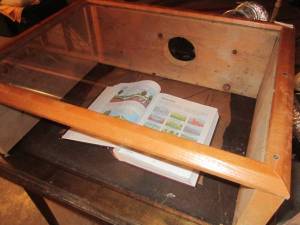 Alternatively, if there’s a window handy where you plug in your desktop computer, you could have an extra fan installed in it and vent it right out the window like I did many years ago: 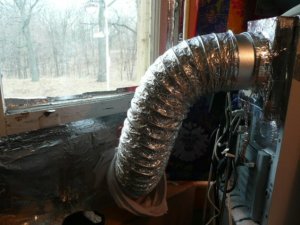 Remember to take the hose off and plug it when the computer is not in use, especially during the winter. I lost a hard drive (and over a year’s worth of data and photos) because I forgot.

If you build a box, but handling the papers is still a problem,  the eraser ends of pencils or a rubber tip on a stick can be used for turning pages, and as they will also be in the vented box,  the rubber fumes shouldn’t be a concern.

I’ve also seen images of unvented boxes that had a curtain or a solid front with openings cut for the hands, and a hinged top to add or remove items, in order to enclose the fumes.

I’ve been thinking that a box that held a blender or other small fumey appliance, along with a small air purifier (if no window was available) could be really useful in a kitchen (like mine).

For someone who has MCS and EHS, but has to cook with propane, you could even build an enclosure for the stove, as described by EI Wellspring. They have other great resources too!

Here’s hoping that the ideas and images here inspire solutions for everyone who needs them.

It takes a village… to create problems and to solve them.

Hopefully we can get a critical mass working on preventing and solving problems soon!

2 responses to “Fume Enclosure Boxes for Reading, Computers, and Appliances”