There are many symptoms. Not all are immediate. Some can be delayed.

END_OF_DOCUMENT_TOKEN_TO_BE_REPLACED

Update: Wendy is NOT a Widget and She Shouldn’t be Treated Like One

In a kind and sane society, disabled people would be treated with respect and dignity, and safe and accessible housing would not be taken from them when there is no place else to go to.

We need to treat people with invisible, inconvenient disabilities better!

Wendy has a safe-for-her-home, the ONLY place she can now be and remain functional, but the bureaucrats only see that it is a 3 bedroom home and not the 2 bedroom home her doctors have said she (at minimum) needs.

She cannot go to the mall, to the hospital, to a library, or to an apartment where people smoke, use fragrances, pesticides, or have dryer vents spewing toxic laundry products her way.

The only kind, humane, and sane solution is that she should be allowed to remain where she is, until the province has built MCS/ES accessible housing that is safe for her to move to…

According to this CBC interview, the housing authority has extended Wendy’s stay until the end of July, although a week or so ago they had told Wendy that she only had until April 30th, and they have not informed Wendy or her lawyer about this news (she learned via the CBC).

Hers is the 1st interview: http://www.cbc.ca/maritimenoon/2016/05/03/chemical-sensitivity-eviction-pot-pardons-your-thoughts/

∴ Wendy is NOT a widget. Widgets can go anywhere. Wendy can’t. “Widget” is used in texts and speech, especially in the context of accounting, to indicate a hypothetical “any…

Source: Wendy is NOT a Widget and She Shouldn’t be Treated Like One

Since papers, inks, and computers can release fumes that are too toxic for some of us to breathe, adversely affecting our ability to remain functional, and since there’s no getting away from papers and technology in modern society, an assistive device was invented some decades ago that could be useful to bring back as a more popular accessory: the reading box!

I recently ran across an ad on Craigslist for one that was for sale in the US, and then someone found an old catalogue (2002 PDF) with a few other pics, so I thought I’d share the info and images here in case they can help anyone else.

A reading box is basically a box made of wood, glass, or metal, with an opening in the front, and glass on top to read through. A vented box will also have a dryer hose out the back, and a fan of some sort to push the air through the hose and out of a window. A barrier with a vent sized exhaust hole would also be needed to cover the window opening being used. 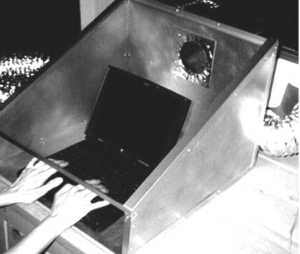 This computer box is from the catalogue.

END_OF_DOCUMENT_TOKEN_TO_BE_REPLACED

What Do You Think About Accommodating Someone With MCS/ES or Allergies?

Some people think they have the right to do whatever they want, regardless of how it affects anyone else around them. Sometimes what they do is from ignorance (not knowing or understanding causes and effects), sometimes it’s a deliberately hurtful, even criminal action. Either way, what they do causes all kinds of suffering that is fully preventable.

Here are a few images you can think about and share if they “speak” to you:

END_OF_DOCUMENT_TOKEN_TO_BE_REPLACED

Progress is being made! 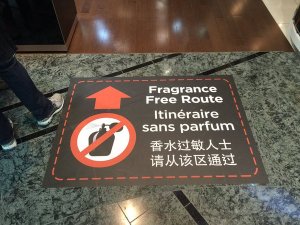 Maybe it needs some work to make the English language portion clear?

Right now, it could be taken to mean that they have a free route to fragrance!

So, once they get the English fixed for those who don’t understand French (where it’s clear they mean without perfume, but then again, how many people actually read their box or bottle of laundry detergent to see that there’s parfum in there? and in their deodorant? and in their shampoo?)  we can (maybe) get to the plane without being assaulted by fragrance chemicals (but, oh, it’s only “free” from the duty free shops with fragrance).  Still, I guess it IS progress… kind of…   Right?

Assuming we can actually get there without a life threatening (or merely disabling) reaction,  what happens once we are in the actual plane?

END_OF_DOCUMENT_TOKEN_TO_BE_REPLACED

Are You A Woman Over the Age Of 65 With MCS/ES?

IF SO, WOULD YOU PARTICIPATE IN A STUDY OF WOMEN’S NEEDS AS YOU GROW OLDER WITH ENVIRONMENTAL SENSITIVITIES?

The James Madison University Environmental Sensitivities Research Team is inviting women aged 65 and older who have experienced environmental sensitivities (chemical and/or electrical) to participate in an online study of how your needs are being met as you grow older with sensitivities.

If you are interested in participating, please click on the link below to see the consent form and learn more about the study. END_OF_DOCUMENT_TOKEN_TO_BE_REPLACED

Good news for some people who have MCS/ES, CFS/ME, and FM

THE CITY OF TARRAGONA (CATALONIA, SPAIN) IS THE FIRST MUNICIPAL GOVERNMENT THAT IMPLEMENTS IT!

The first municipal government that has stepped forward to implement this plan, is the City of Tarragona Municipal Government (Tarragona is a major city 100 kilometres south of Barcelona). In the plenary session held last November 30th, the “Institutional Declaration of support for people with Central Sensitivity Syndromes” was approved, which consists of a concrete programme of measures. This is a historical step.

In part, the agreement includes:

END_OF_DOCUMENT_TOKEN_TO_BE_REPLACED

This was originally posted to an online support group. V granted her permission to share it here. She has been able to put this part of her life story into words that so many of us find hard to express, and I thank her deeply for sharing her words with you too. 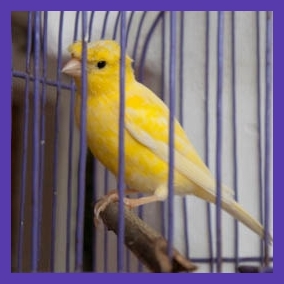 It’s about 1:30 a.m. and this is about the time where I start to feel despair about everything in my life. I just can’t seem to adapt to the isolation and lack of a routine or purpose. Also, I can’t seem to find any pain meds for my chronic pain. I have been in physical pain for so long.

I know this post may seem disjointed which is apropos considering how I feel.

I AM so tired of spinning my wheels…Along with MCS I have so many other medical issues…non terminal that I know of but still…I have asthma and allergies.. I can’t be around dogs or cats, the weather determines my breathing status for the day and my physical mobility.

I can only eat about 10 things and it’s exhausting to try to rotate these foods and I spend excessive time trying to plan. Even planning a rotation I still get itching throat and sometimes a swollen throat with some of the ten things I think I can eat…it’s horrible to start eating and not know how I will feel ..

END_OF_DOCUMENT_TOKEN_TO_BE_REPLACED

When she needed accommodation, you won’t believe the rigmarole that ensued.

(unless you have MCS/ES)

“They should not have to make significantly more effort to access or obtain service. They should also not have to accept lesser quality or more inconvenience.”

Someone with MCS (who wishes to remain anonymous) was asked about how her efforts to receive appropriate, safe, accommodation were going, so she could see a health care provider. She is one of a growing number of people who become disabled from exposures to toxic chemicals found in many everyday products and materials, especially in fragrances.

This is pretty much how the story goes:

She contacted a health care provider by phone and talked to a receptionist.

She asked her if they had a scent-free policy and was told they didn’t.

END_OF_DOCUMENT_TOKEN_TO_BE_REPLACED

It’s Only A Little Fragrance

How many times have we heard it’s “only a little fragrance”?

telling someone who uses a wheelchair that there are “only a few steps”.