Endocrine Disruption… Huh? Why Should We Care?

Many of us have no idea what “those people” are talking about when they mention endocrine disruptors. Sounds like something foreign and insignificant, or at least it did to me, until something caught my attention a few years ago.

It turns out that the endocrine system is a hugely busy and important system in our bodies, one well worth looking into and trying to understand. When we start to understand how important this system is, we might start to notice how we are (unwittingly) damaging ourselves, or rather, being damaged, because there are so many endocrine disrupting chemicals allowed into our daily lives now.

It is so much easier to stop causing harm (in whatever ways we are able) when we understand what the problems are, and so difficult, if not impossible, when we remain oblivious. In this case, sticking our heads in the sand will not only harm us, it has the potential to also harm our grandchildren and their grandchildren. 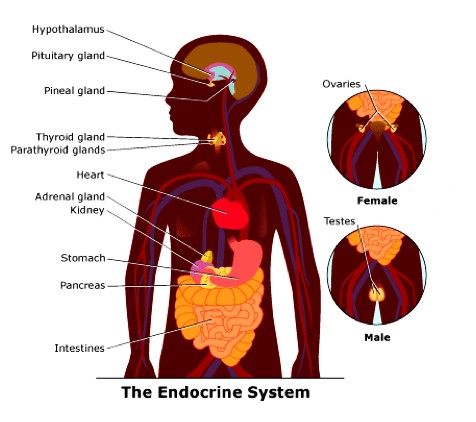 (image from EcoWatch, link below)

A really nice (copyrighted) illustration is on this page:

“The endocrine system regulates all biological processes in the body from conception through adulthood and into old age, including the development of the brain and nervous system, the growth and function of the reproductive system, as well as the metabolism and blood sugar levels. The female ovaries, male testes, and pituitary, thyroid, and adrenal glands are major constituents of the endocrine system.”

The really disturbing thing is, that we are exposed to endocrine disrupting chemicals on a daily basis now.

“scientists find that extremely low levels of some types of environmental estrogens disrupt specialized brain cells and their ability to regulate brain chemistry. All of the EEs tested changed the way cells released and reabsorbed dopamine, an important chemical messenger that governs movement and pleasure.”

“The widely variable substances are present in plastics, PCBs, pesticides and herbicides, pharmaceutical products, and personal care products. While the amounts found in these products are often extremely small, the sheer volume of items containing them makes exposure unavoidable.

People around the planet are exposed to estrogenic compounds on a daily basis. The constant exposure to low levels may contribute to the potential to harm human health…”

“The Director of the National Institute of Environmental Health Sciences (NIEHS), Linda Birnbaum, PhD, is being criticized by some Republicans for authoring an article that describes linkages between endocrine disrupting chemicals and the onset of disease, as well as the need to understand and monitor the effects of these chemicals. Instead of encouraging efforts for greater understanding of these chemicals, the members of Congress instead blasted the article as a potential breach of National Institutes of Health (NIH) policy. NIEHS, a program of NIH, seeks to reduce the burden of human illness and disability by understanding how the environment influences the development and progression of human disease.”    (image posted above is from this article)

“The short article, When Environmental Chemicals Act Like Uncontrolled Medicine, published online May 7 in Trends in Endocrinology and Metabolism, lays out the case that environmental chemicals can produce unwanted endocrine effects, leading to an increase in certain diseases.”   …

“Over the past 40 years we have seen a 57% increase in prostate cancer, 40% in breast cancer, 85% increase in hypospadias (penile defects), and a 50% reduction in sperm count [1]. In addition, attention-deficit hyperactivity disorder (ADHD) has increased by 30%, autism spectrum disorders have doubled in the past 10 years [2], obesity has doubled in the past 30 years [3], and the number of US adults with diabetes has more than tripled since 1980. Clearly we must look to the environment as the primary cause of such increases because the human genome has not changed over the same time-period. Endocrine disruptors are likely to be a key factor in the surge of many diseases and disorders.

Endocrine disruptors (Figure 1) are ‘exogenous agents that interfere with the production, release, transport, metabolism, binding, action or elimination of the natural hormones in the body responsible for the maintenance of homeostasis and the regulation of developmental processes’ [4]. The case linking environmental chemicals with altered or abnormal endocrine activity is strong.”

…”We detected 55 compounds, indicating a wide range of exposures from common products. Vinyl products contained > 10% bis(2-ethylhexyl) phthalate (DEHP) and could be an important source of DEHP in homes. In other products, the highest concentrations and numbers of detects were in the fragranced products (e.g., perfume, air fresheners, and dryer sheets) and in sunscreens. Some products that did not contain the well-known endocrine-disrupting phthalates contained other less-studied phthalates (dicyclohexyl phthalate, diisononyl phthalate, and di-n-propyl phthalate; also endocrine-disrupting compounds), suggesting a substitution. Many detected chemicals were not listed on product labels.” …

Letter to the president about chemicals disrupting our bodies: Theo Colborn

The Fossil Fuel Connection
FUEL FOR THOUGHT AND MOTIVATION

“In 1991, an international group of experts stated, with confidence, that “Unless the environmental load of synthetic hormone disruptors is abated and controlled, large scale dysfunction at the population level is possible.”1

They could not perceive that in ten years a pandemic of endocrine-driven disorders would begin to emerge and increase rapidly across the northern hemisphere.

TEDX has also confirmed that the feed stocks for most endocrine disrupting chemicals are derived from the production of coal, oil, and natural gas.

It is clear that endocrine disruption, like climate change, is a spin-off of society’s addiction to fossil fuels.

“Setting aside the effects of endocrine disruptors on infertility, and just considering their influence on intelligence and behavior alone, it is not improbable that hormone disruption could pose a more imminent threat to humankind than climate change.“

“Fossil fuels come out of the ground contaminated with toxic byproducts. Both the fuel and the byproducts are used to create such things as plastics, pesticides, flame retardants, and fragrances. These chemical products are now present in our homes, schools and work places, in toys, clothing, cosmetics, sunscreens, electronics, furniture, cleaning products, lawn care products, food packaging, automobiles, building materials, and more. As tests have been refined to detect very low chemical concentrations, they have been found in our air, our soil and our water, as well as in every human being ever tested. They have even been measured in the umbilical cord blood of newborn babies.“

“The Disappearing Male is about one of the most important, and least publicized, issues facing the human species: the toxic threat to the male reproductive system.

The last few decades have seen steady and dramatic increases in the incidence of boys and young men suffering from genital deformities, low sperm count, sperm abnormalities and testicular cancer”

WHAT YOU CAN DO to protect yourself
and future generations 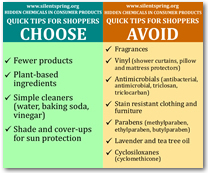 Top 12 Tips for Greening Your Cleaning and Personal Care

6 responses to “Endocrine Disruption… Huh? Why Should We Care?”