Report: RF EMR and the Health of Canadians

… “Numerous concerns relating to radiofrequency (RF) exposure were raised by witnesses during Committee meetings on Safety Code 6 as well as in the briefs that were submitted. …
∴
Witnesses also spoke to possible links between RF exposure and cancer, reproductive issues and autism.These concerns tied in to other testimony that expressed unease about RF exposure in schools as a result of the use of Wi-Fi; the need for RF exposure limits and guidelines to protect vulnerable populations such as pregnant women, infants and children, and others who may be more susceptible to the effects of RF exposure; and electromagnetic hypersensitivity (EHS).
∴
While witness testimony and briefs often emphasized the need for Health Canada to take a precautionary approach to RF exposure by reducing the limits established by Safety Code 6 (and sometimes provided examples of limits and other measures taken to protect populations from RF exposure in other jurisdictions), they also referred to steps that individuals can take to reduce their own RF exposure. Finally, some witnesses stated that industry should play a role in reducing RF exposure.” …
∴
∴
RADIOFREQUENCY ELECTROMAGNETIC RADIATION AND THE HEALTH OF CANADIANS
∴
Report of the Standing Committee on Health
∴
This much awaited report contains 12 major recommendations by effectively echoing the expert evidence heard by eight MPs during the recent hearings this Committee.
∴
∴
The List of Recommendations:

END_OF_DOCUMENT_TOKEN_TO_BE_REPLACED

It’s Not You. It’s The Wireless.

Just like toxic chemicals aren’t adequately regulated to protect public health, neither are the levels of microwave radiation that we are all subjected to on a 24/7 basis, whether or not we want to be. And none of us have been asked if we consent to any this.

They (we?) are still raising awareness about smoking, breast cancer, asbestos, lead, and many other things they/we already know enough about to take action and stop the causes of adverse health effects from multiplying. Sadly, these days the toxic economy is more important than public health. So, we have to learn how to protect ourselves as best we can while working to change the system to one that values health and life more than money.

Here then are some photo memes and resources to raise awareness about the dangers of wireless (seeing as raising awareness is all we can do some days). 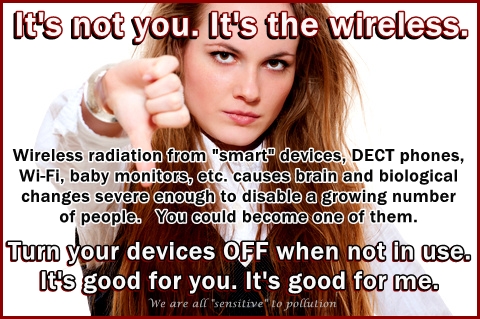 END_OF_DOCUMENT_TOKEN_TO_BE_REPLACED

Report: RECOGNITION, INCLUSION AND EQUITY – THE TIME IS NOW

Many of us have been waiting for action for decades, let’s hope that this is the project that finally makes it happen. It has been a long time coming…

‘RECOGNITION, INCLUSION AND EQUITY – THE TIME IS NOW: PERSPECTIVES OF ONTARIANS LIVING WITH ES/MCS, ME/CFS AND FM’

At long last, I am writing to let you know about four new groundbreaking reports – products of a 5-year initiative that I and colleagues began in 2008 – that present exciting new research on the three environmentally linked conditions of ES/MCS, ME/CFS and FM, and that develop a wonderful new model of care and support for those living with the conditions in Ontario.

END_OF_DOCUMENT_TOKEN_TO_BE_REPLACED

Great (not)… The TTC is erecting more accessibility barriers for people who are disabled with EHS, and it’s a big move backwards for protecting the health of children and pregnant women.

Accessibility wise, this is similar to removing ramps for people who are mobility disabled. It creates barriers to access and also subjects some people to further pain, suffering and disability.

Using the precautionary approach would be the wise thing to do.

See C4ST for more information about wireless technologies and health.

Frank Clegg, the former CEO and President of Microsoft Canada is the CEO of C4ST.

TORONTO – Commuters will now be able to send emails and surf the internet at two of the Toronto Transit Commission’s busiest subway stations.

Effective Monday, both St. George and Bloor-Yonge have been equipped with a wi-fi network in what the TTC is calling a “soft launch.”

Underground cellular phone service is still unavailable as the company contracted to install the wireless system has yet to bring a telecommunications carrier on board.

The TTC entered into an agreement with BAI Canada Inc. on Dec. 5, 2012 to build the network in the subway system for $25 million over 20 years.

A staff report indicates the company is still in negotiations with carriers including Bell, Rogers, Telus, Mobilicity, Wind and Public Mobile.

The TTC hopes the design, installation, construction and full implementation of the network will be completed…