While these resources are primarily directed at women of childbearing age and children, they are really applicable to all of us. If a mother stops using perfume, but the father still piles on the scented deodorant, aftershave, and cologne, then his sperm, the mother, and children (born or unborn) are still being exposed to harmful chemicals.

If other family members, friends, and places like daycares are using scented laundry,  personal care, and cleaning products, they too are putting moms-to-be and kids at risk.

The adverse effects from these chemicals can be life-long, even longer. Our exposures can affect our grandchildren. Eliminating them from our lives now will ensure better health all around, including downstream, where fish and wildlife are also being affected. 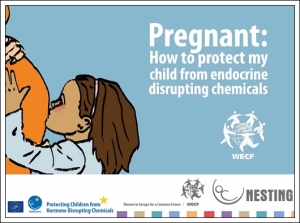 The short video below, produced by Women in Europe for a Common Future  (WECF), provides simple, important information on how you can protect yourself and your child from Endocrine Disrupting Chemicals (EDCs). They are found in so many places now.

WECF have also developed a new website, NESTING, which is another good resource for all of us. They have assembled a lot of good advice there.

Here’s an example from their Cleaning & personal care page:

END_OF_DOCUMENT_TOKEN_TO_BE_REPLACED

How To (Legally) Poison Your Baby’s Air

It should be illegal to sell products that disperse secret, unregulated, ingredients into the air people have to breathe, especially children.

Children need clean air to breathe! Clean air is air without petrochemicals in it. 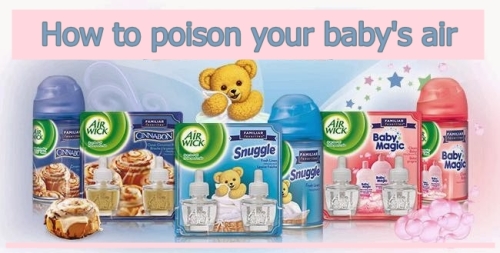 These things emit hazardous chemicals. It is not cute or fresh to poison kids!

It’s time to stop and think about what is going into the air we expect children to breathe.

Breathing is not optional!

When children’s hospitals enact policies banning fragrance use on their premises, you know there are good reasons to be concerned:

END_OF_DOCUMENT_TOKEN_TO_BE_REPLACED

How Acceptable Are Your Levels?

Do you know that you have hundreds of toxic chemicals in your body right now?

Do you know that our bodies weren’t designed to deal with 24/7 exposure to the kinds of substances we are breathing, ingesting, and absorbing all the time now?

How many of you have any idea what kinds of chemicals are in your body now, and what kinds of health effects they might be having on you, or on your eggs and sperm?

Have you agreed to be a chemical experiment (and are any of you being paid for it, or receiving funding to deal with the adverse effects that might happen or are happening)?

If you are like most of us, then you are completely unaware of what we are all being exposed to and the effects these exposures are having on our health. We still believe that products have to be safe if they are being sold to us. It’s hard to believe otherwise.

Like so many others, we don’t question this belief until something goes wrong in our own lives. Ed Brown was no exception. But after his wife suffered a couple of miscarriages, he got to asking

And he made a film about his quest for answers:

END_OF_DOCUMENT_TOKEN_TO_BE_REPLACED

Please watch this important and very well done new video by Dr. Bruce Lanphear, where he discusses chemicals and other toxins that affect brain development in children (and can cause MCS/ES symptoms in others) and what we need to do about it.

Little Things Matter: The Impact of Toxins on the Developing Brain

Here’s a longer video presentation by him from Autism Canada

END_OF_DOCUMENT_TOKEN_TO_BE_REPLACED

A great new resource has been launched to guide mothers and mothers-to-be regarding wireless radiation hazards and safety precautions that need to be taken.

“Most pregnant women understand that they should stay away from cigarette smoke, avoid alcohol and be careful about eating potentially contaminated foods of any kind. The weight of evidence clearly supports the need to protect pregnant women from wireless radiation exposures as well.”

Their advice is good for all of us to heed:

END_OF_DOCUMENT_TOKEN_TO_BE_REPLACED

While we are on the subject of food…

If you are still eating fish, especially salmon, then you need to know this:

END_OF_DOCUMENT_TOKEN_TO_BE_REPLACED

Chemical Brain Drain… What Are We Thinking?

This is the most significant issue I have with MCS/ES, the ways my brain (and functioning) are affected from exposures to chemicals in everyday products.

I suspect (and I am not the only one) that some of the bigger problems we are seeing in society now, are due to widespread neuro-toxic chemicals (in addition to wireless radiation) affecting too many people’s ability to think clearly.

Our intelligence depends on the integrity of the complete organ. Even subtle effects, such as memory deficits, attention problems, or motor dysfunction, can seriously impact on our health. Thus, the brain differs substantially from other important organs, such as the kidney or the liver, where we can lead successful lives without maximal function…

Our brain functions are valuable to ourselves and to society. Data on exposures to lead, mercury, and pesticides suggest that the losses to society amount to hundreds of billions of dollars every year. This calculation is based solely on losses of income and does not take into account less tangible damages associated with chemical brain drain

(chemicals known to cause brain toxicity and neurological symptoms in humans)

Someone needs to check IFRA’s list of ingredients to see how many of these are used in fragrances, I think too many…

END_OF_DOCUMENT_TOKEN_TO_BE_REPLACED

OBGYs Advise Pregnant Women to Live As If They Have MCS/ES!

The Royal College of Obstetricians and Gynaecologists (RCOG) released a new paper regarding everyday chemical exposures during pregnancy, and confirmed that there are sufficient indications that all is not well, that some of these chemicals we are exposed to on a daily basis are linked to causing some serious health problems, so it is better to be safe than sorry and avoid as many exposures as possible during pregnancy.

It’s high time time doctors stop being afraid of the chemical and pharmaceutical companies to speak up and out about this!

I applaud them for finally having the courage!

“the approach recommended is for such women to put ‘safety first’. That is, to assume that risk is present even when it may be minimal or eventually proven to be unfounded. This is often referred to as the ‘precautionary approach’.

● use fresh food rather than processed foods whenever possible

● reduce use of foods/beverages in cans/plastic containers, including their use for food storage

● minimise the use of personal care products such as moisturisers, cosmetics, shower gels and fragrances

● avoid the use of garden/household/pet pesticides or fungicides (such as fly sprays or strips,rose sprays, flea powders)

● only take over–the–counter analgesics or painkillers when necessary

● do not assume safety of products based on the absence of ‘harmful’ chemicals in their ingredients list, or the tag ‘natural’ (herbal or otherwise). 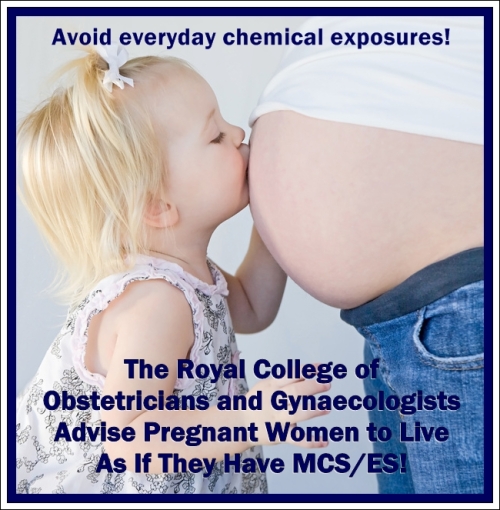 If you substitute “woman” or “pregnant woman” with “person who has MCS/ES”, and change “minimize” and “reduce” to “avoid”, and “pregnancy” to “probably permanently”, you get a pretty good idea of what doctors (who often have no idea or training about MCS/ES) should be saying to people about life with MCS/ES.

But really, it’s good advice for everyone.

Please note that children should also be protected from these same exposures, as their brains and bodies are still developing and these exposures can interfere with normal development and daily functioning.

They did omit one other very important exposure to avoid during pregnancy, and that is exposure to wireless radiation from sources such as cell towers, WiFi and devices like mobile phones, DECT phones, and even wireless baby monitors!